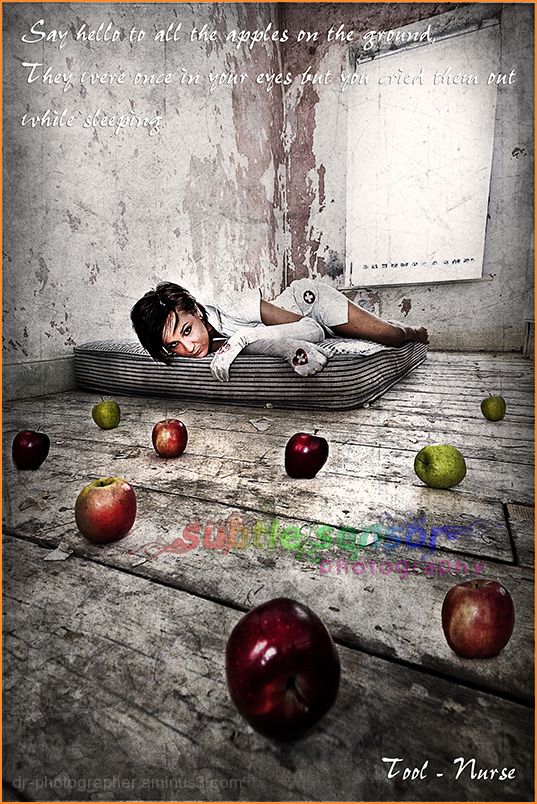 Posted by theSubtleSensor (Newcastle upon Tyne, United Kingdom) on 4 March 2011 in Abstract & Conceptual.

Oh my! Its been almost a year since I posted on here! I was right in the middle of a study on architecture in Barcelona and then i dropped right off the map.

I've half a mind to continue the study (even just as an excuse to get the pictures edited) but right now I am posting an image from my latest personal project.

The idea is to find descriptive, evocative phrases within song lyrics and use them to generate an image.

This one is from a song called Nurse by Tool, which is a whimsical portrayal of a patient in a (mental?) hospital who is falling in love with his nurse (and her access to drugs) and believes that she, too, is falling for him.The particular lyrics that inspire this image are:

"Say hello to all the apples on the ground, they were once in your eyes but you cried them out while sleeping".

The image also used lyrics from other sections of the song to inform the narrative, an example being:

"She's fallen hard for me, I can see it in her eyes; she acts just like a nurse with all the other guys".

Anyways, enough rambling. I hope you like it! It may be a while before anything else goes up as work keeps gtting in the way of play! You can keep an eye on what I'm shooting in my workdays by following my other AM3 photblog: http://subtlesensor.aminus3.com/

I'm not really postimg much on here these days. I only intend to post my personal projects or experimental work as this is what I need feedback on - so please do leave a constructive comment or a star rating.

These days I post more regularly to the blog on my website, so skate on over there to see what I've been up to recently: Freelance Photographer in Newcastle upon Tyne | Subtle Sensor Photography

You can find my fashion and portrait work here: Subtle Sensor on Model Mayhem

Thanks for dropping by!

Nice processing for this original scene !

great light and settings, very decadent wall, it looks a nurse from an nuthouse.

@pedro alexandre: Thanks! The full lyrics to the song reveal that the song is written by a psychiatric patient who is in love with his nurse - so I'm glad I managed to convey that sentiment! =D)